What We're Coming To


In her 50s, she began researching the internment camps where she and her family had been incarcerated during World War II.  When she passed away at 93, she had collected over 8,000 documents that filled countless file cabinets and a bathtub in her home. She had become a national expert on the topic, and, through her testimony to Congress, helped passed the 1988 Civil Liberties Act.
I am inspired by Yoshinaga's story because, 1) she started her project in her 50s and kept going (see my blog post Learning After 50, 9/4/19), 2) she was a woman who made a difference, and 3) through her efforts and out-spokeness – even though she was a victim -- she improved the accountability of our democracy.
However, Yoshinaga's story brings me home to the San Luis Valley where I live, and where there were no internment camps.
For many years my family has driven to New Mexico for the airport in Albuquerque, for shopping in Taos and Santa Fe, and to get through that state on our way to California and relatives there. We thought we were on Highway 285, but we always passed a sign that declared we were on the Ralph Carr Memorial Highway.
One day, we realized we had cell phones and, with the touch of a few buttons, we could finally answer that question: Who the heck is Ralph Carr and how did he get a chunk of highway named after him?
Ralph Carr was governor of Colorado  from 1939 to 1943, at the beginning of World War II.
He was Republican, and fought against Roosevelt's New Deal and unions.
However, he faced a crisis, along with all the Western governors, when the U. S. Congress passed legislation requiring all people of Japanese descent to be rounded up and sent away from our coasts to internment camps in the middle of the country.
Mr. Carr objected.
However, (Do you see a lot of howevers coming up around this guy?) he was not objecting, as his fellow Governors, to having Japanese people in his state. He objected to them being rounded up and incarcerated for no good reason. Turns out, he was a rabid anti-racist, maybe one of the first "antifa" in our state government.
Carr said, "An American citizen of Japanese descent has the same rights as any other citizen. ... If you harm them, you must first harm me. I was brought up in small towns where I knew the shame and dishonor of race hatred. I grew to despise it because it threatened [pointing to various audience members] the happiness of you and you and you." [Schrager, Adam. The Principled Politician: The Ralph Carr Story. Fulcrum Publishing; Golden, Colorado; 2008. Chapter 10: "Late March 1942," p. 193. As quoted in Wikipedia.]
Well.
Pretty strong words for a politician to his constituents. Here was a man, from the male majority, speaking up for "others" at risk of his own career.
He lost the next election to a Democrat who wanted to use the National Guard to keep any Japanese- Americans from entering our state.
You can find a monument to Ralph Carr at the top of Kenosha Pass and others scattered around Denver, including Carr Street, which was near my own childhood home.
For his stand in defending Japanese-Americans during World War II when the Japanese were considered enemies of the U.S., Carr is still being honored in this state.
Now our family is pleased to travel the Ralph Carr Memorial Highway in honor of a principled man. We are pleased that the 1988 Civil Liberties Act resulted in reparations for survivors of the Japanese-American camps and an apology from President Ronald Reagan.

We are hoping to see another chunk of highway named after Aiko Herzig Yoshinaga.
Through the efforts of Yoshinaga and Carr, this is what we are coming to: a more accountable, more just America.
- January 13, 2020 No comments:

We are frequently asked how our chickens fare in wintertime. Today, I'll show you.


Last week I talked about the bleak mid-winter. Here is our place covered with snow. In the far left of this photo you'll see a vague outline of a long, brown building. That is the home of our chickens. 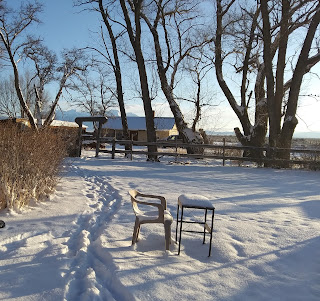 Their home is a combination of hen house and shed. For a creature that began its life on planet earth in the jungles of South-east Asia, chickens are extraordinarily adaptable. They now live in high mountain valleys, dry deserts, and the middle of cities. However, they must be cared for at this time of year, and they must be protected from predators year-round. 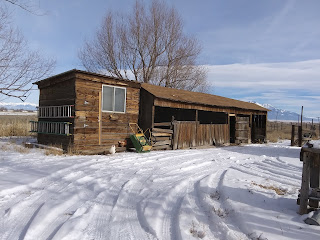 On the left, is a smaller building, the hen house. Our chickens roost there at night, and return to the nesting boxes to lay their eggs during the day. We had this hen house on our previous property and moved it when we moved. It is perfectly adapted for chickens. 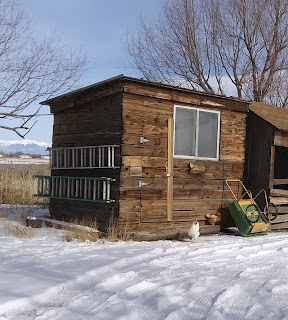 Our hen house has two sources of heat: an oil-filled radiator, and a hanging heat lamp. These keep the temperature at least above freezing during the nights.

On the right, is a long shed that already existed when we moved here. It had probably been a calving barn for the dairy cows who lived here in the 1930-1960s, and also provided shelter for sheep. Remarkably, it is completely encased in wire, making it very secure. Chickens can't leave unless we leave the door open, and predators, such a coyotes, can't get to the chickens – again, unless we leave the door open. 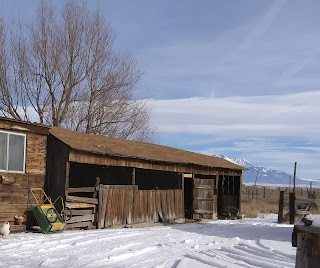 The shed, where our chickens spend most of their day, has only solar heat. It also has a small  metal trough in one corner for free-flowing water from our artesian well. This water is about 50 degrees, so it doesn't freeze as long as it runs. Thus, our chickens always have fresh water.

Chickens love to eat seeds, insects, grains, grass, and weeds such as Kosha. The sheds are clearly surrounded by snow right now, so chickens don't have access to their favorite treats. They must be fed every day.
As you may have noticed, our chickens don't go walking across the snow. 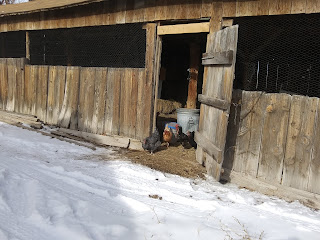 Occasionally, they make an attempt to seek out green pastures, as this white and red chicken did. 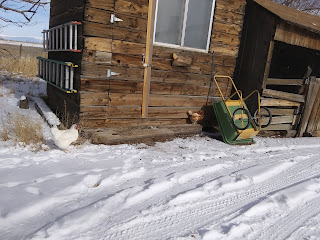 These two chickens returned, but they crossed to the door of the shed on old pieces of lumber, balancing like kids crossing a dangerous bridge because they didn't want to step into the snow all around them. 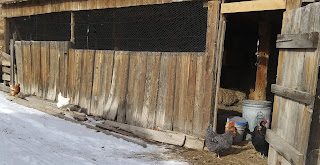 So chickens can survive our winters with help, but they lay fewer eggs. Whether because of the shorter days or the cold, we don't know.
As I said, chickens have managed to spread all across the globe. But … does anyone know if there are chickens in Antarctica?
- January 06, 2020 No comments:

Holly Y
I have been a teacher, host of a children's program on public radio, and Peace Corps volunteer. Now I am a full-time novelist, living the life I always dreamed of. Welcome to my blog!